Many parents have concerns about the amount of time their children spend watching television and surfing the internet.

With a recent survey showing that 59% would prefer to go without pocket money and new clothes than internet access, those concerns are not without foundation.

Parents are all too aware of the risks attached to their child spending time online and there is a fundamental fear that children are vulnerable to being exposed to unsuitable and inappropriate images, not to mention contact with predators.

It is true that children are far more technologically aware than parents and this does mean that they take more risks online than responsible adults would like.

But the internet has great benefits for children too and these should not be outweighed by the disadvantages.

Modern television programming frequently includes scenes that are completely unsuitable for children under the age of 18.

While most satellite and cable TV providers offer parental controls for films and on-demand content, it is difficult to totally prevent children from encountering some scenes of mild nudity or violence and aggression in normal television programmes, even before the watershed.

[Image Credit : The Mind of Krysti]

The fact is that the decision to show such scenes in shows that are deemed suitable for family viewing is made by a group of people on the basis of their own opinions, which might very often differ from those of some parents.

The internet is more controllable than television. There is a wealth of parental-control software available, much of which is free to download.

Parents can prevent their children from accessing inappropriate or pornographic images or videos and can control the type of web content that children can view.

There is evidence that children exposed to scenes of violence in television programmes and films develop aggressive behaviour themselves. Parental controls for standard television viewing are limited and parents may be unaware of the content of programmes which do not receive a suitability rating.

Children also seem to be bombarded with sexual imagery these days, in everything from advertising to music videos. Unless a parent is prepared to lock every single channel that might, at some point, show an unsuitable image, having some influence over what children watch can be a challenge.

Regulating what children can see on their computer screens is considerably easier with the software that is at parents’ disposal.

Spending hours in front of a television set is unhealthy. Children are physically inactive, which can lead to obesity and health problems. There is often little to challenge them mentally, either, unless they watch only educational programmes.

Watching TV is also often a solo activity which does not require any interaction with others. This can prevent the proper development of social and communication skills.

Of course, sitting in front of a computer screen for hours on end is equally unhealthy, but there is the opportunity for social interaction via platforms such as Facebook and Twitter.

Many children manage their social lives online and for some their virtual social lives are far more exciting than anything they experience away from the computer.

The trick for parents is to find a balance by encouraging children to expand their social activity outside of the home and using social media as a tool to achieve this. Parents must be aware of the dangers of social interaction online, too, but with discreet parental guidance the risks can avoided.

The most recent worry for parents with regard to children’s internet use has been the rise of the mobile internet and the wide availability of smartphones. Children are reluctant to be without a mobile phone and having the latest model is a must.

For parents, allowing their child to carry a mobile phone can be a double-edged sword. There are benefits, of course, in the case of an emergency, but a child having a smartphone often compounds a parent’s fears.

Most mobile service providers offer parental controls which can be turned on or off only be parents contacting the service provider themselves. These measures can cut off access to inappropriate websites and prevent downloads of unsuitable media.

In some cases, the controls also monitor messaging and calls to alert parents to improper text content or to calls or texts from unknown numbers. Parents can find information about smartphones and service providers at Cell Phone Expert.

The internet is a terrific educational tool and has enormous benefits for children. Parents can control access through software and other technological means, but must also communicate with their children about online safety and security.

What is your view on this ? 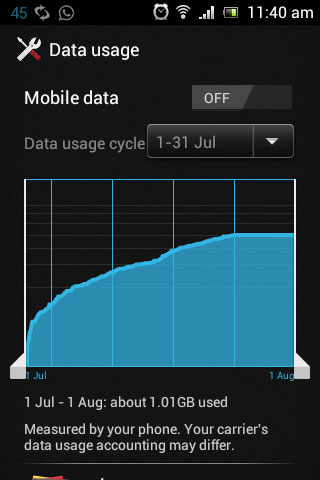 How much Internet Bandwidth is needed for your Mobile Phone?