The first 3 organic search results get 68.1% of all clicks

While ranking in the top three is a valid strategy,

How many people click on the first page of Google results?

Around 95.1% of Google searches stay on the first page.

This coincides with Backlinko’s finding, which shows that only 0.78% of visitors clicked on a result on the second page. 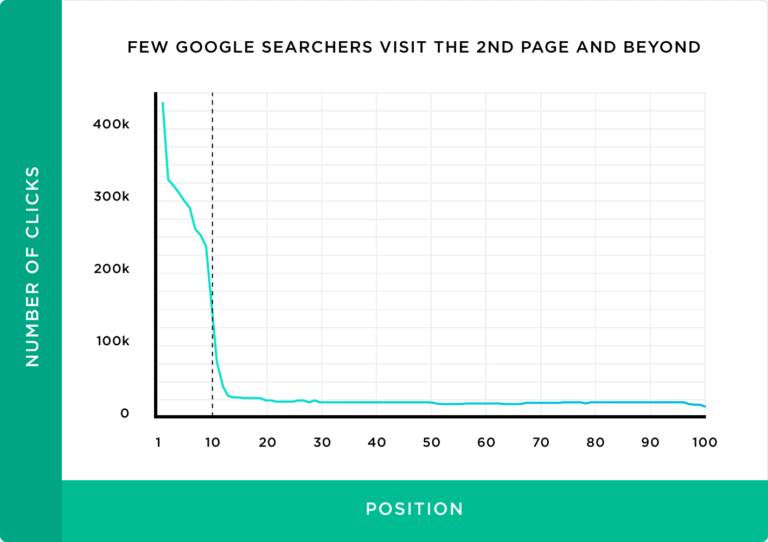 Around 65% of all Google searches are “no-click” searches.

Similar Web’s analysis of 5.1 trillion searches found that almost two-thirds of searches ended in no clicks to other sites. The study also shows that clicks are more common on desktop devices, where 50.75% of visitors click on another web property. On mobile, zero-click searches stood at 77.22%.

Unsurprisingly most people instinctively click on the first result provided by Google, which explains the big difference between the number of visitors that land on the first and the second organic search result. 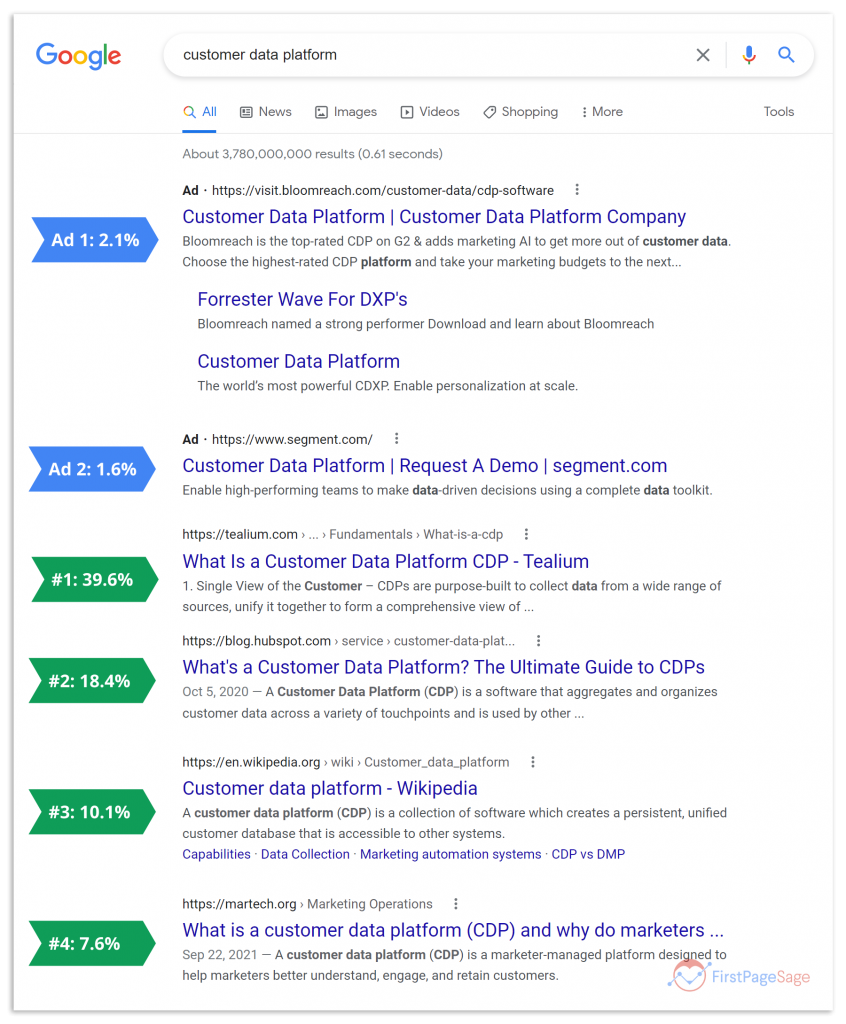 In this research by FirstPageSage,

1. 39.6% of users click on the first organic result,
This is 21.2% more than the number of visitors to land on the second organic result. Average CTRs keep going down, with the #1 SERP position getting more clicks than the third to tenth position combined.

3. Analysis of mobile searches shows the same results. The #1 search results get the most clicks, or 28.5%, with the number of clicks going down to less than 3% for the 9th and 10th positions. 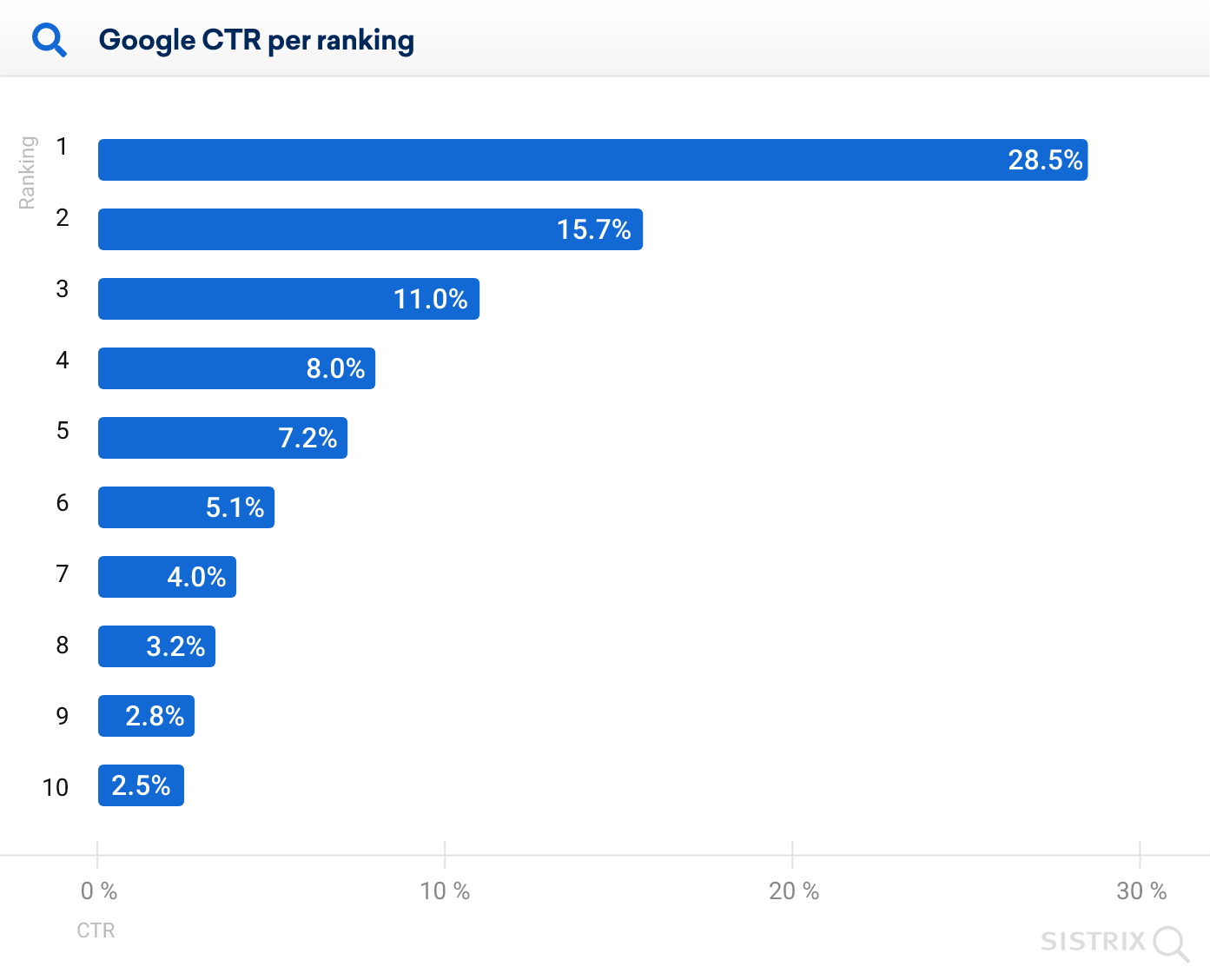 5. Does moving up a spot make a difference?

Organic CTR for sites ranking #7 to #10 is pretty much the same, which means that moving up a couple of spots up from the bottom on the first page doesn’t make that much difference.

6. Moving up from one spot in the top three search results will make a big difference, though—going up from #3 to #2 can increase CTR by roughly 30.8%.

Here are Backlinko’s estimates of how many clicks moving up a position on a SERP gets you. 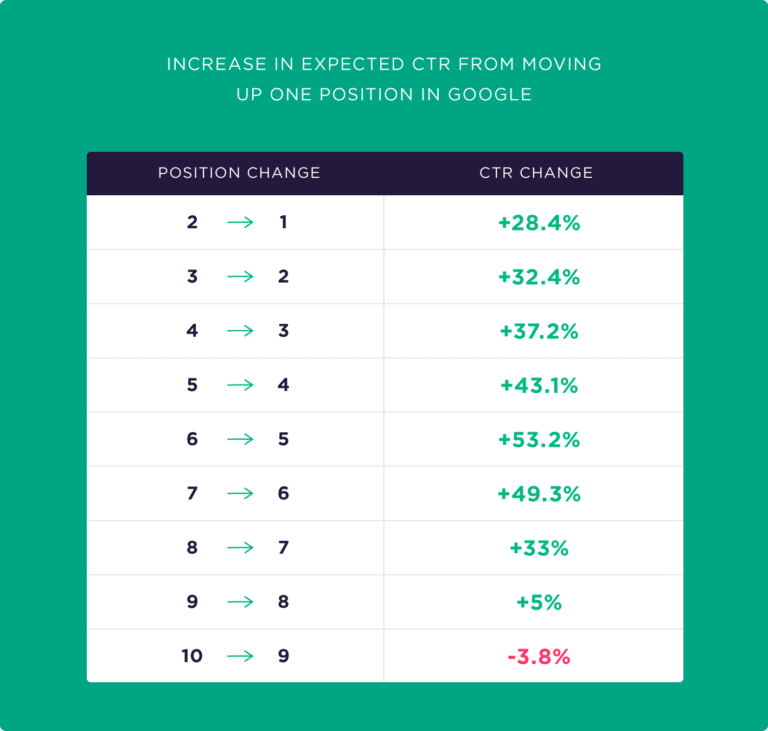 The #1 organic result gets an average of 19 more clicks than the first paid search result.

That is not to say that Google Ads are not worth it.

Here are some key stats on Google Ads CTR:

The Google Ads and Google Shopping feature, Sistrix says, have the worst impact on CTR for the organic results below.

This is particularly true on mobile, where the Google Shopping feature takes up a lot of valuable real estate on the first SERP. In this case, it is estimated that only 13.7% of visitors click on the first organic result, with CTRs for other positions falling way below average. 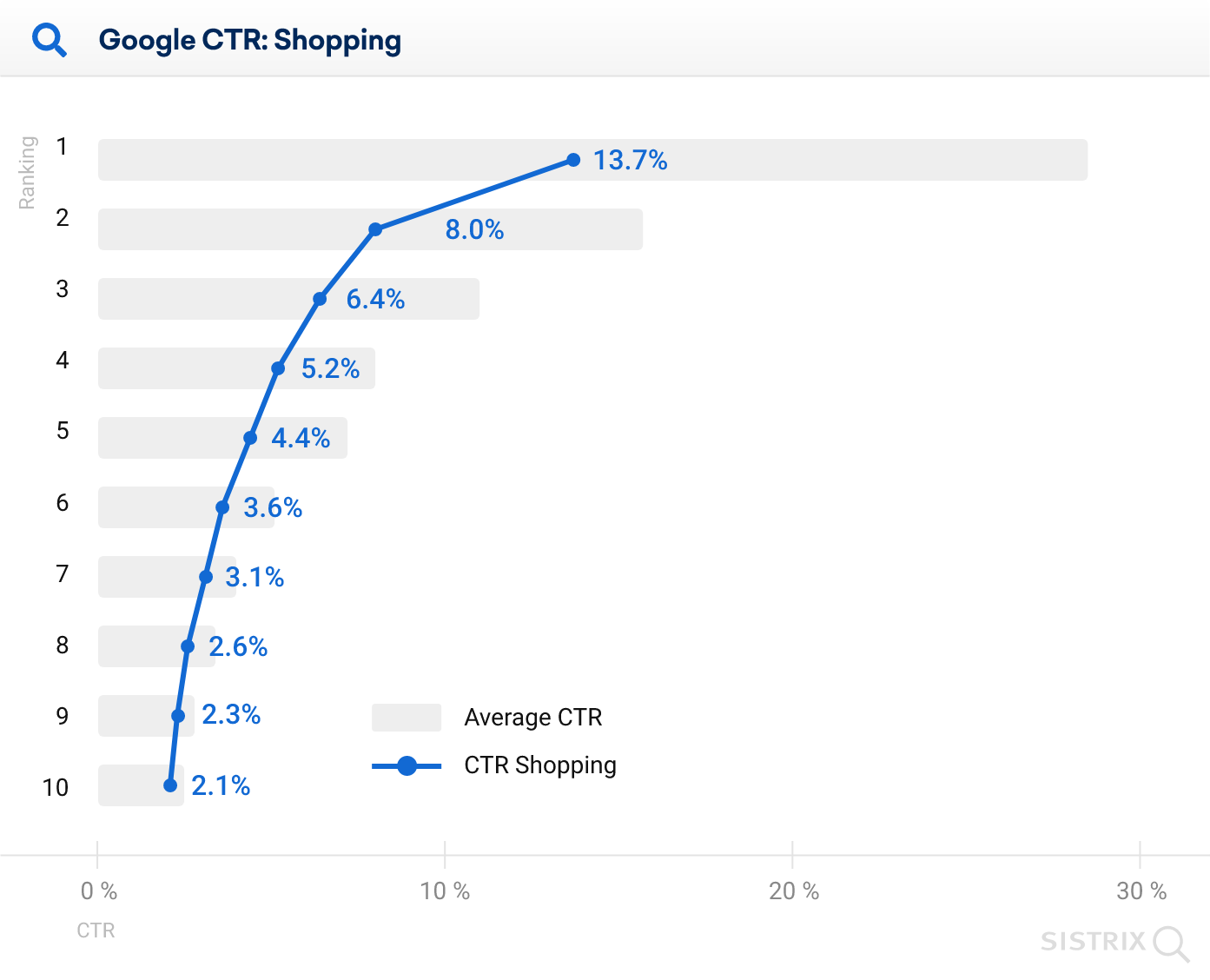 Any Google integration added to the SERP generally lowers the CTR for the organic results below.

Here is a closer look at the most SERP layouts and their impact on organic search results.

Featured snippets usually provide more information than traditional organic results and tend to include other elements such as tables, bullet lists, or images.  They appear when Google believes it can answer the search query directly in an answer box. According to Ahrefs, 12.29% of search queries come with featured snippets in their search results.

So since snippets actually answer the searcher’s question directly, the site included in the snipper does not get any real benefits. According to Sistrix, the #1 position, with the featured snippet, gets 5.3% points less than the average CTR for that position. 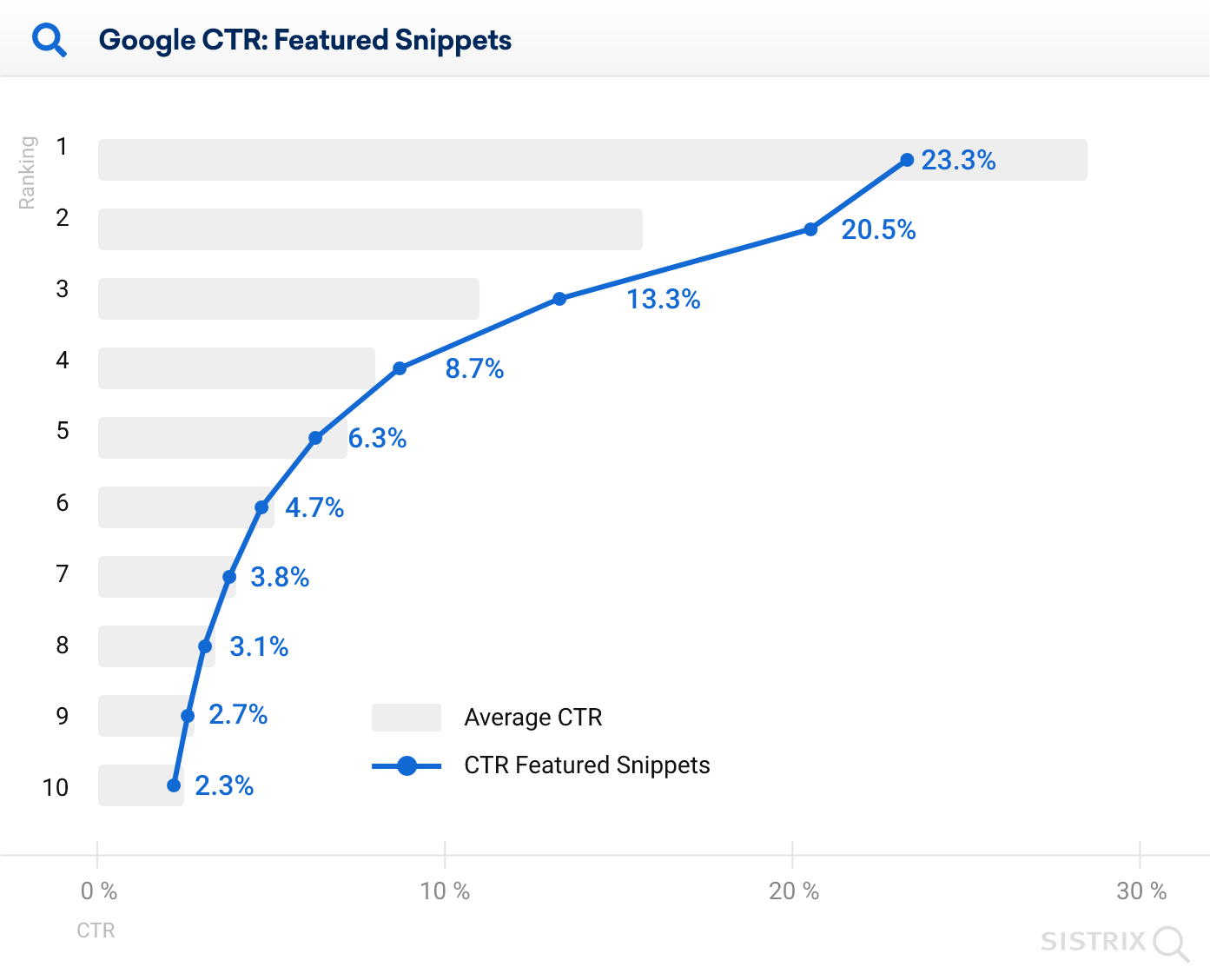 FirstPageSage, on the other hand, whose research is based on desktop searches, shows that organic search results featured in a snippet get the highest CTR—an average of 43.7%. Similar to Sistrix, it also reveals that the second-ranked site gets a boost from 18.4% to 27.1% CTR.

When Knowledge Panels comes up in the search results, the number of visitors who click on the first and second organic results drops considerably.

This is even more noticeable on mobile, where the Knowledge Panel is the first result under the search box (unlike on desktops where it is located on the top right), giving users all the info they need without the need to open and load new pages. 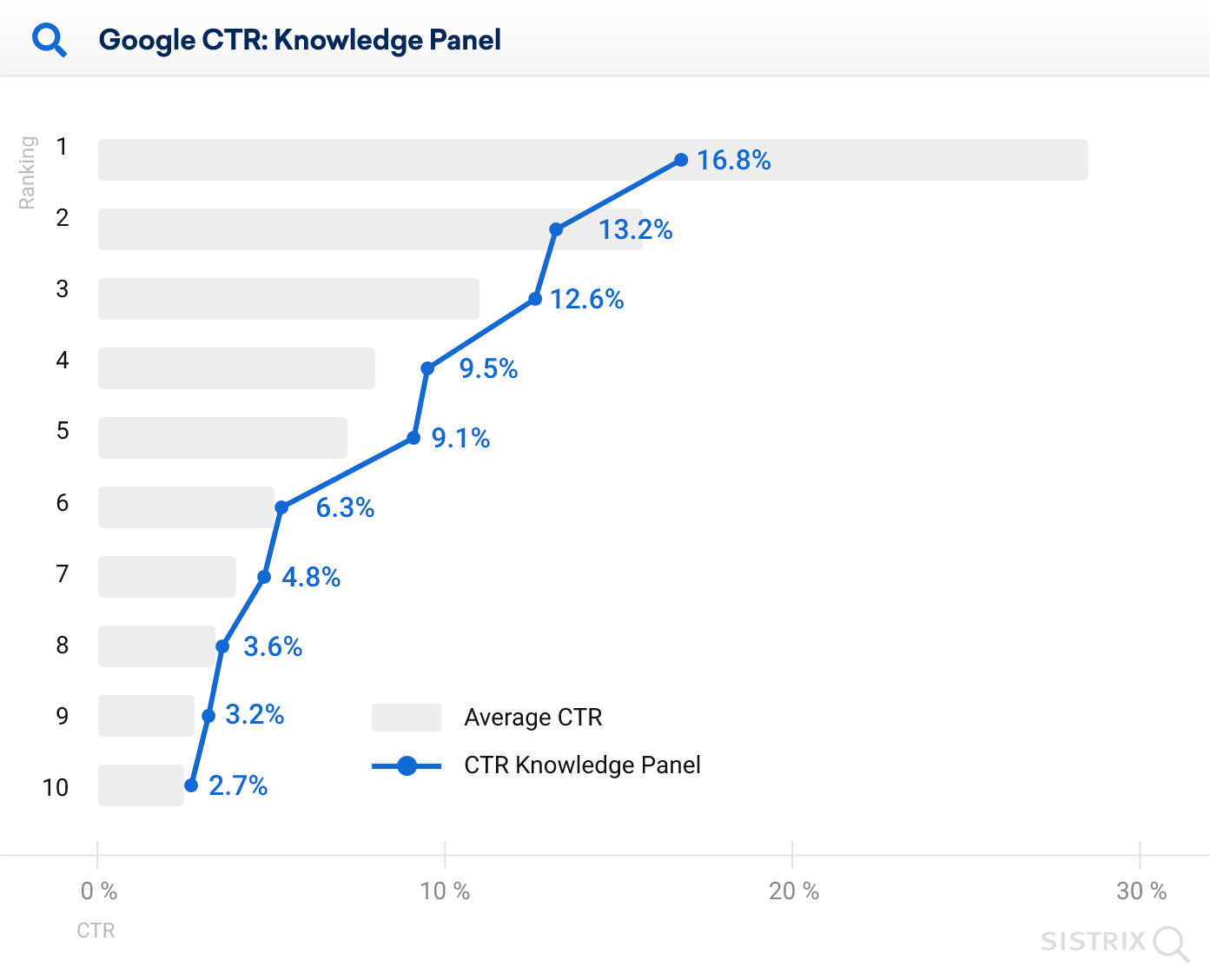 The same pattern can be seen with Google My Business / Google Maps local search results (paid and organic). With the Local Pack integration, the CTR for organic results goes down. 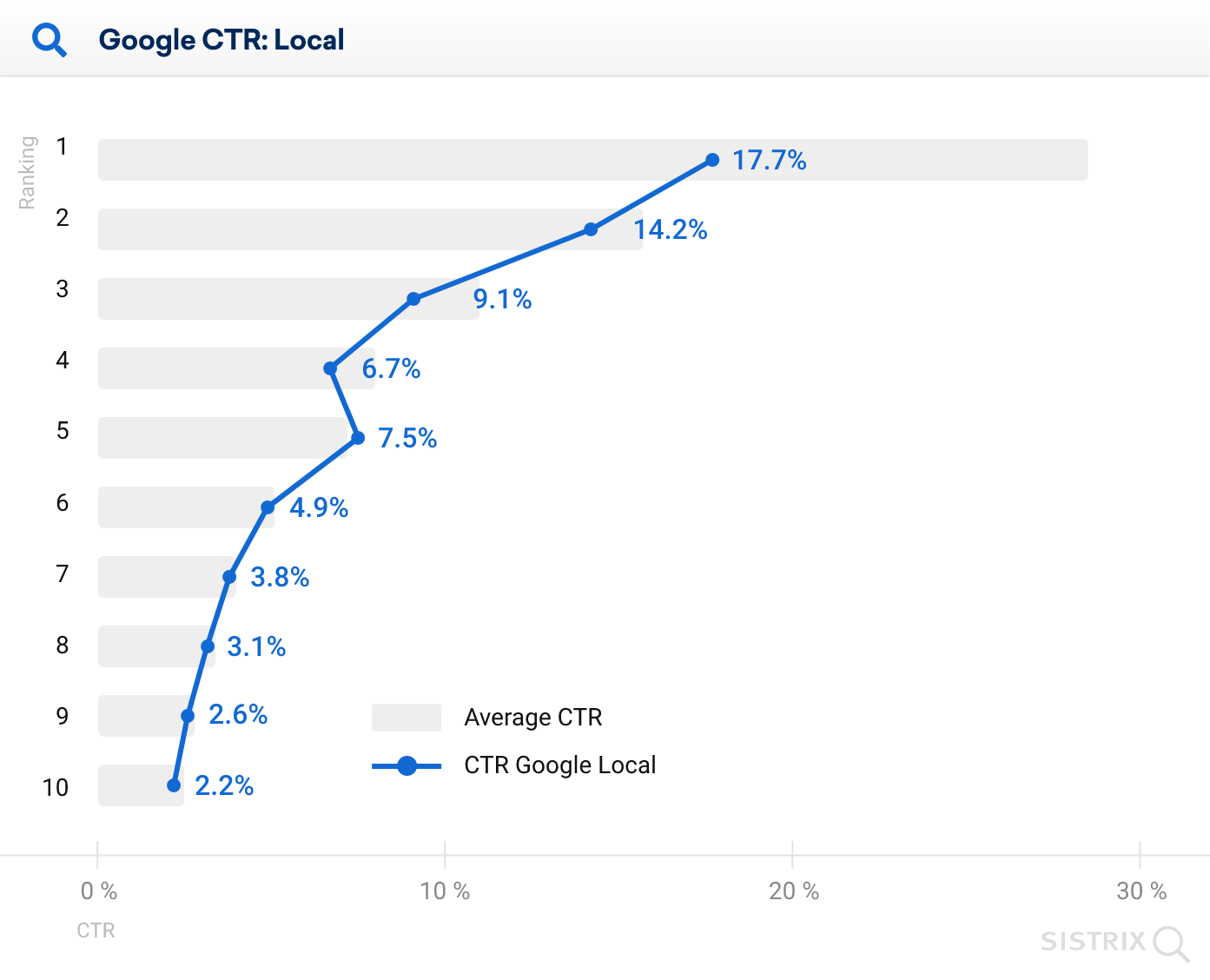 What about the CTR for results in the Local Pack?

FirstPageSage analysis reveals that the CTR for Top-of-Page Ad Boxes is:

The Sitelink extension, which shows subpages and related pages, comes up when Google believes the user is looking for a specific website, which can clearly be seen impacting the CTR.

Sites ranked #1 get a CTR of 46.9%, meaning that almost every second visitor clicks on this result. As expected, the CTR for the #2 and #3 positions is lower than average, reinforcing the idea that visitors who get this SERP layout have a clear website intent. 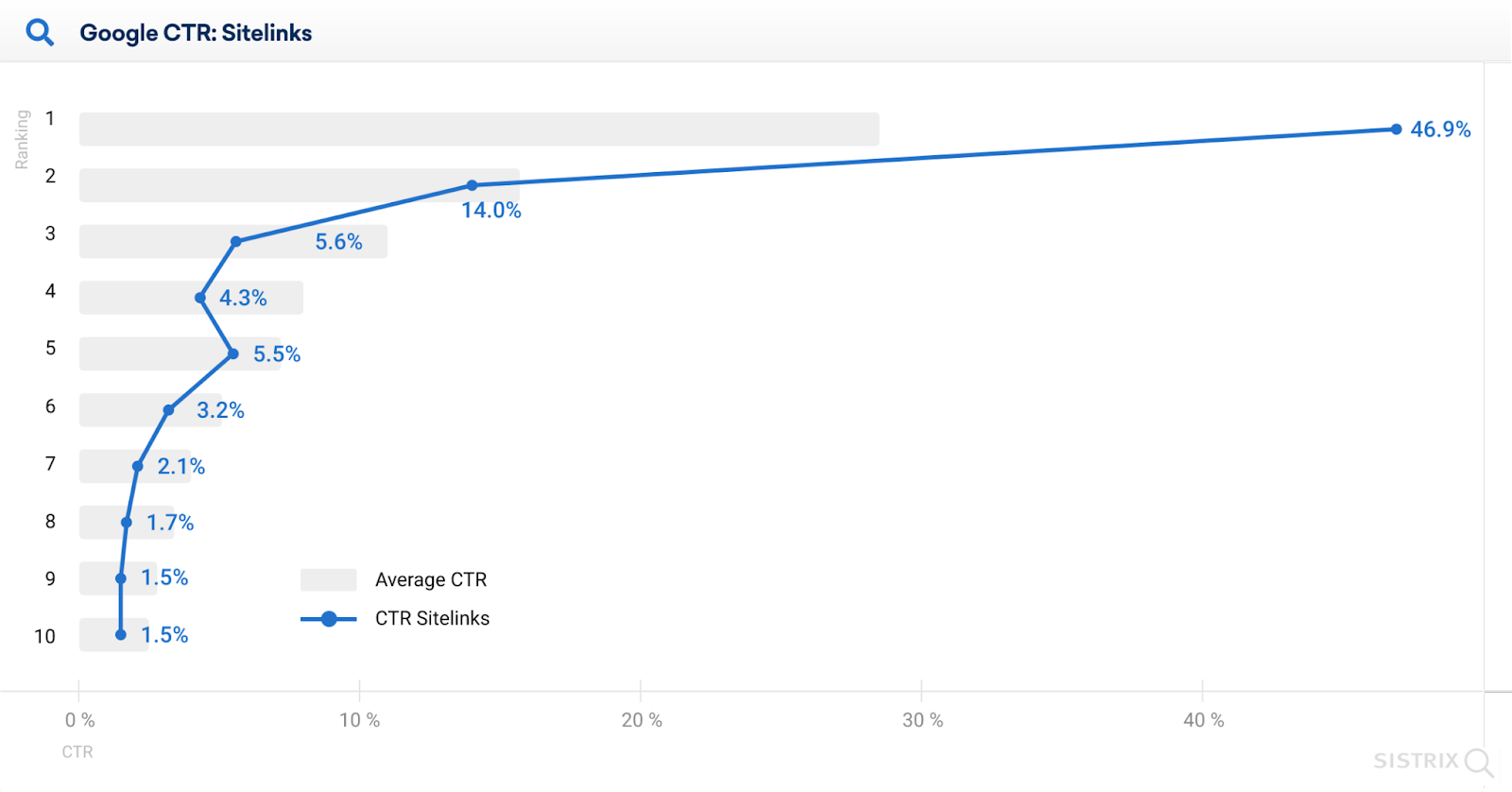 As with snippets and Knowledge Panels, when Google integrates elements like images, recipes, news, locations or other features in SERPs, the remaining organic search results get fewer clicks.

The only exception to this rule is video boxes. If these are integrated into search results, more visitors click on the #1 position than average. However, the average CTR for the other positions remains the same.

Sistrix estimates that 34.2% of visitors click on the first result in a purely organic SERP layout. This is 6% higher than the average CTR.

Organic CTR by position for the rest of the positions: 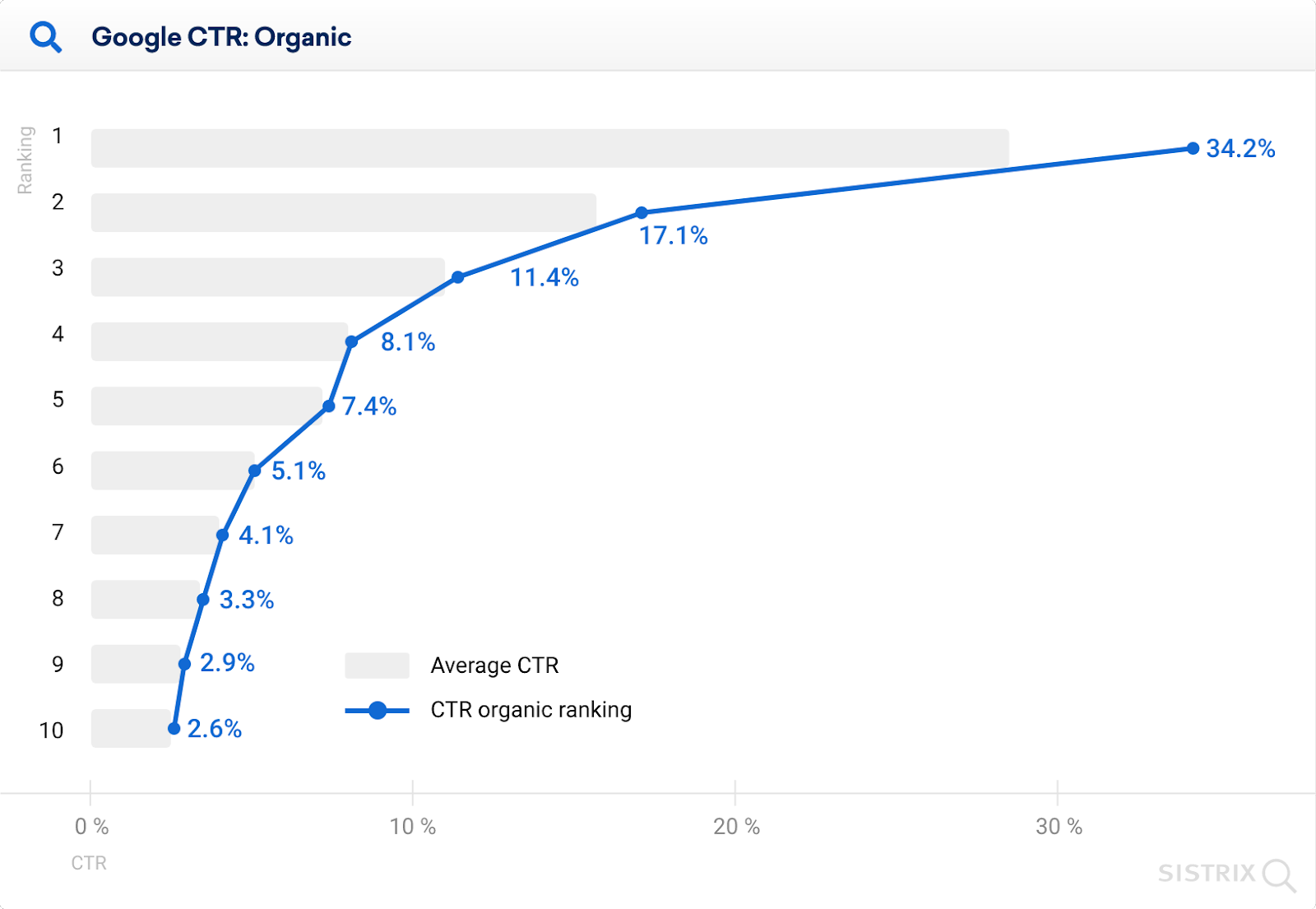 On mobile, the same trend continues. Long-tail keywords see a higher CTR than generic two-word keywords, even in the first search result.

This is due to the fact that long-tail searches take place further down the sales funnel when visitors have a clear search intent. On top of that, there is less competition in niche searches; another reason marketers should target long-tail keywords.

CTRs for branded keywords are naturally higher, whereas non-branded terms have to compete with paid ads and get lower organic clicks as a result.

This chart from Advanced Web Ranking clearly shows the importance of being in the top two results, as CTRs for branded and non-branded keywords drop by 6 to 7% between #2 and #3.

What is the key takeaway?

Even though most searches give a purely organic SERP, Google integrations can significantly impact the CTR of the top three organic results.

The importance of search intention continues to grow. This factor determines the SERP layout and, by extension, the number of clicks an organic result can get for a given keyword. With this in mind, marketers should optimize their content or manage their keyword targeting strategies to rank in Google’s integrations, such as featured snippets, videos, or Knowledge Panel.